What are the deepest causes of problems in human life?

So I’ve been doing specialized forms of research with the goal of discovering the best answers to this question.

If we look at this question from the stand point of physics we get a very interesting answer. From physics we know that matter is made of molecules and that molecules are made of atoms. Atoms are made of subatomic particles and subatomic particles are described by physics as wave packets of energy. So from the perspective of physics everything is made of patterns of energy.

If we take this physics based view of life that everything is made of energy then what we find is that problems in human life come from 4 fundamental energy patterns. In order to understand them properly we can refer to one of the most useful charts we have in Inner Greatness Optimizing called the Where to Start Chart. 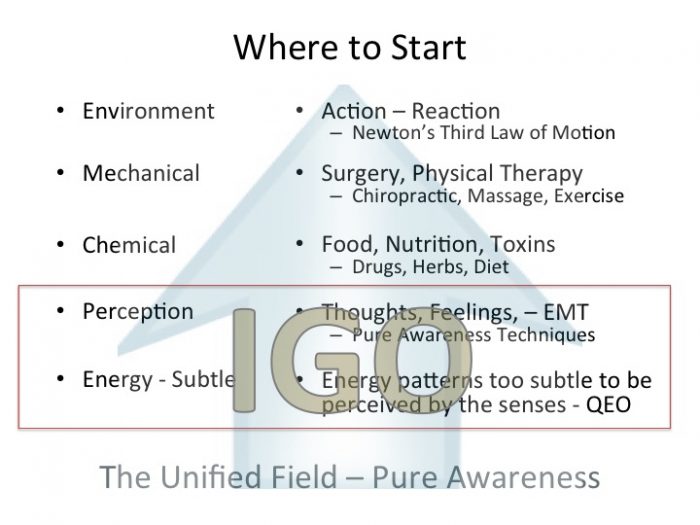 In IGO we use this chart to determine whether to use the QEO or EMT (the Pure Awareness Techniques) or both together when approaching any specific problem. We have different versions of this chart – sometimes the bottom two levels are switched with the first level being the thoughts and feelings level (called Consciousness on some versions) and the 2nd level being Energy. It depends on whether we consider the subtlest level to be vibrating consciousness or vibrating energy. It can be useful to see it in either way. Here’s what the other version that we sometimes use looks like – 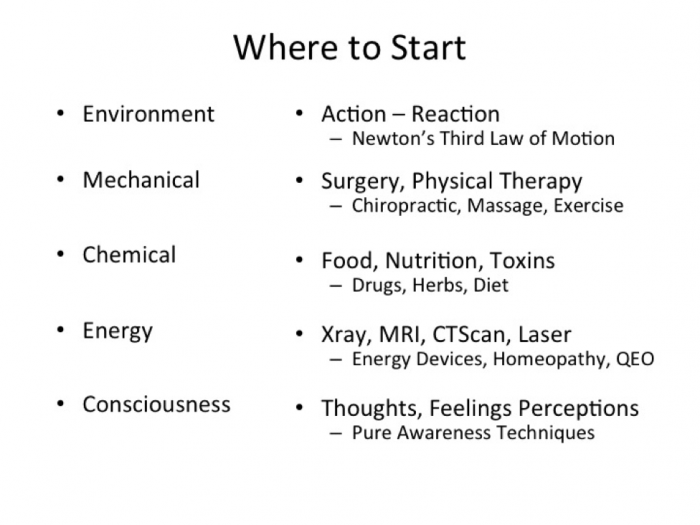 Physics has in recent years developed insights into the unification of the basic forms of energy that physicists study. They were looking for a unifying factor between gravity, electromagnetism, and what are called the Strong and the Weak force. The recent discoveries of physics involve a theory called String Theory.  String Theory describes something that is at the source of all of these four forces that means that gravity, electromagnetism, and the strong and the weak force all are expressions of a unified field which is described as a field of tiny vibrating strings of energy.

They both describe an unmanifest state of limitless, lively pure potential. This is the source of the energy that can become anything and that becomes the four forces mentioned above.

So it would appear that the Unified Field and the State of Pure Awareness are one and the same.

So the Where to Start Chart is a simple explanation of the hierarchy of how vibrating consciousness expresses itself in increasingly densely packed layers of vibrating awareness. It starts with the expressions of vibrating consciousness as patterns of energy that are much too subtle to be experienced with the human senses. This is the level at which we can use the QEO to pick up these ultra-fine energies and invert and/or amplify them to cancel out the specificity of the energy patterns.

So the four fundamental energy patterns are:

And the methods for resolving these energy patterns are:

This function has been disabled for 卓越中心.