You are at Home » Articles » Scientific Validation of Our Technologies

Scientific Validation of Our Technologies

Scientific Research has been at the heart of many major breakthroughs in the advancement of health and wellness over the years. The best scientific research is done under what are called “double-blind”, “placebo-controlled” and “randomized” conditions.

A Placebo treatment means a treatment that looks like it is the “real thing” but in reality is not an active “real” treatment. An example of this is a famous study done in Finland on orthopedic knee surgery that found that after one year that the benefits of the surgery were essentially the same for people who had the actual surgery as for those who only had the small surgical slits made to the skin so that it “looked like” they had had it.

Randomized simply means that the subjects or the study are randomly assigned to receive either the placebo or the actual treatment. This is done to prevent biasing the results by virtue of some selection criteria other than random selection by the administrators of the study.

In a pilot study on the focus treatment that is offered at Inner Greatness Centers the study was done under double-blind, placebo controlled, randomized conditions. Half of the participants received the actual treatment and half received a “placebo” treatment. This was easy to set up as two devices were used in the study, both of them were of the same type, appearance and function, however, a “blinder” technician opened one of the cases and disconnected the wire that  sends the therapy signal of the device to the output port where the cable with an electrode is attached that goes to the person receiving the treatment. The machines were then labeled “A” and “B” and the participants were randomly assigned to either the A or B device.

Here’s an individual case of one boy who was in the placebo group. The testing was an evaluation before and after by one of the parents of the student study participant. Here’s the dramatic difference between the placebo treatment and the actual treatment 2 weeks later to the same student. As you can see on the graph below, there is very little difference between the pre and post treatment values from the initial placebo treatment. 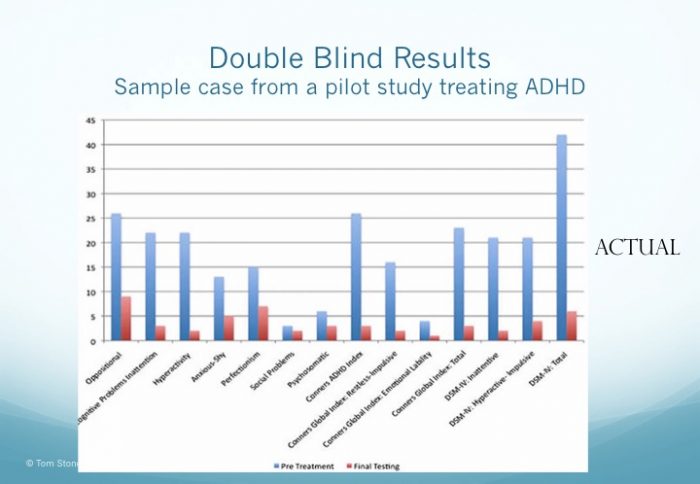 And here’s the results of the same questions answered by the same parent two weeks later following the actual treatment being given to everyone.

As this study design was double-blind, placebo controlled and randomized, his large difference is a very good indication that the treatment is actually having a “real” effect and is not due to the person just “thinking” they are getting the actual treatment.

A larger double-blind, placebo-controlled, randomized study in which reading speed and comprehension will be measured via computerized testing will be performed later this year (2016). We will report on the results of that study here.

A study was done in Austria to determine the effectiveness of the treatment for reducing the stresses that cause allergies. This study was a retrospective study based on 200 cases from a medical practice.

The success with this type of therapy device led Dr. Peter Schumacher, a pediatrician from Innsbruck, Austria, to conduct a study of 200 cases of severe allergy and neurodermatitis in order to record the outstanding results that he was receiving doing this type of treatment. The study was based not on a carefully selected group but on a random patient population within a six-month period, irrespective of age, diagnosis and severity of the condition.

An established diagnosis of allergy was a condition of inclusion in the study. Diagnosis was considered established not just if one or more tests yielded a positive result but also if there was a definite proven connection between the allergen and the allergy symptoms. Hay fever was excluded from the study due to the peculiar characteristics of that condition. The patients and their families were interviewed 6 months after the completion of therapy.

Here are pictures of a young boy patient from before and after the series of treatments. • 83 % of cases treated were concluded successfully (since the conclusion of therapy patients had tolerated the allergen without reaction).

• 11 % of cases treated improved (the features of the allergy were still present yet over time much less pronounced).

• 4.5 % The allergy remained unchanged. No therapeutic success could be identified or, after initial improvement, the same allergy recurred. However abstinence failures during therapy were detected in all members of this group.

• 1.5 % could not be evaluated since there had been no new contact with the allergen in the intervening period.

Another set of before and after pictures from an additional case of neurodermatitis.

To highlight some particularly difficult cases: Of the 62 neurodermatitis cases recorded, 44 were symptom free following the treatment and 16 were improved;

and of the 33 asthma cases, 29 were symptom-free and 4 improved.

Additional studies have found similar results. The study mentioned above was conducted in 1993.

Since that time additional advances with the therapy techniques have reduced the number of therapy sessions for treating specific allergens to 1 to 3. Even “central” food allergens that have proven hard to treat by other methods are being treated successfully, usually with only 1 to 3 therapy sessions.

One of the additional studies on allergy treatments with this kind of technology was done in Xi’an, China at the Pediatrics Department of Xi’an Central Hospital, Xi’an, China with 154 participants.

The total efficacy rate of treatment of allergic diseases using this method was 89%, with a total healing rate of 78%. During treatment and following the cessation of treatment, no patients felt discomfort or experienced adverse reactions.