You are at Home » Articles » The ACE Study

A large study was done at Kaiser Permanente in San Diego, CA in conjunction with the Center for Disease Control. This study is known as the ACE Study.[1] ACE stands for Adverse Childhood Experiences.

The ACE study correlates how many different categories of childhood traumas people experienced while growing up with adult health status on average 50 years later.

The results of this study make it clear that there is a very significant graded correlation between an increase in the number of categories of adverse childhood experiences with an increased occurrence of various behavioral and organic illnesses.

With a large population of over 17,000 Kaiser members participating in the study it is clear that unresolved childhood traumas are causal to later physical and mental health problems.

The ACE study also noted that the ACE’s are both much more common than previously thought and that they don’t tend to self heal. They have continued impact even half a century later.

In the CDC’s web site about the study they present this pyramid regarding the ACE Study: 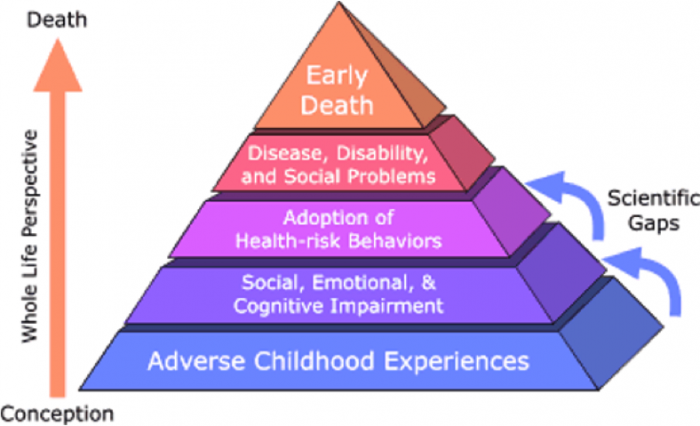 Our research at Inner Greatness Global leads us to believe that there is a missing layer to this pyramid. It is the pre-verbal conditioning that sets us up to not be able to heal the ACE. The insights from our research into the nature of this preverbal conditioning have produced a model called the 12 Causes of Human Problems.

The primary Cause of Human Problems responsible for not being able to heal the ACE is Suppression & Avoidance. This occurs when we are very young and get emotionally overwhelmed many times. No one likes it but in this preverbal state there seems to be a universal decision to avoid feeling things fully in an attempt to not get emotionally overwhelmed. This sets us up to not complete the experience of intense emotional events (ACE) and keep them unresolved in our bodies throughout our lives. The 12 Causes of Human Problems has also been presented with the name the 12 Core Dynamics of Human Conditioning.

The resulting ACE pyramid with the added preliminary layer looks like this:

Recognizing that Fibromyalgia is an ACE based disorder, our approach at the IGCs is on two levels. As part of our free testing we determine to what extent the problem should be treated at an emotional stress trauma resolution level (Consciousness Level) and at an Energy Level of what we call the Where to Start Chart. This kind of test provides a good basis for determining the modalities and priorities for which technologies to use in treating to resolve the stresses at the basis of the condition. Here’s what the Where to Start Chart looks like –

We use a special form of muscle response testing that allows us to quantify to what extent the problem can be effectively treated at the levels of Energy and Consciousness. These are the levels where we target the resolution of the two kinds of stress – emotional and physical stress, that can both contribute to the presence of the Fibromyalgia symptoms.

The ACE study makes it clear that ACE are at least a significant portion of the causes of a whole host of chronic illnesses but the study doesn’t address why the ACE tend to resist self-healing or any therapeutic measures for resolving the long term influences of the ACEs.

Inner Greatness Global (IGG) views Fibromyalgia as an expression of an inability to self-heal the ACEs. IGG views this to mean that the inability to process intense emotional experiences causes these experiences to continue to be held in the body. The emotion is a pattern of energy that we can classify as stress. Such patterns of energy have shown remarkable reductions by the use of the QEO and the Inner Greatness Optimizing Techniques. This may be just the approach that you need to resolve your Fibromyalgia.

To arrange an appointment for a free test to see if the IGC technologies are likely to help you, contact your local IGC at – Locations. If there’s no IGC near you send us an email using our contact form here – Contact us.