Reducing the Stresses that Cause Fibromyalgia

We now have a special version of our Inner Guidance App that helps guide you through the resolution of the unresolved emotional pain at the basis of your fibromyalgia. The app and the preparation for using it are all on this page – Vaporize Your Fibromyalgia

Fibromyalgia syndrome is a common and chronic disorder characterized by widespread pain, diffuse tenderness, and a number of other symptoms. The word “fibromyalgia” comes from the Latin term for fibrous tissue (fibro) and the Greek words for muscle (myo) and pain (algia).

Here’s a great example of how our new approach helps get rid of the stresses that cause Fibromyalgia.

The first fibromyalgia client treated with the IGC Technologies had pain all over her torso and back. She had been to Kaiser Permanente in San Diego, California and had received pain medication but it had not helped reduce the pain. She didn’t like the side effects of it so she stopped taking the medication. She was referred to me by Dr. Vincent Felitti, Chief of Preventive Medicine at Kaiser Permanente in San Diego, and a co-principal investigator of an important study called the ACE Study.

We started the session by using the QEO to help reduce the limiting influence of the deeply engrained habits of Emotional Suppression and Avoidance that come from early childhood conditioning. In this one initial session I taught her to use the IN Technique and she used it on a couple of her worst areas of pain. Both areas of pain were resolved during the session and she felt better.

I asked her if she could continue to use the technique on her own at home, to use it on all of the areas of pain, a few areas each day, and then to come back in 2 weeks for a follow up. She said that she could do that and we set an appointment time for the follow up.

When she came in for the follow up session, she brought her husband with her. He walked in first and said in an elevated tone of voice, “What have you done with my wife?” I was taken aback just a little by this surprising question and his manner of asking, so I replied to him, “What do you mean?” – He smiled and said to me, “Her pain is completely gone!”

His wife came in right behind him and confirmed, “Yes, the pain is completely gone! I’m pain free for the first time in many years!” She and her husband were both extremely happy and she didn’t need any further treatment. I spoke to her several months later by telephone and she said that she continued to be pain free ever since.

At the time that he referred this patient to me, I had shown Dr. Felitti some of the work that we are now doing at the Inner Greatness Centers. As he had not been able to help this person and he was intrigued by what I had shown him, he sent the patient to me to see if our approach would help. It certainly did. The idea behind the referral was for us to explore the possibility of having some new and effective treatment that might be of help for people with Fibromyalgia. Dr. Felitti had told me that Fibromyalgia was a classic ACE based disease.

The ACE Study is a large study that was conducted through the department of preventive medicine at Kaiser under Dr. Felitti’s direction. The study clearly indicates that unresolved childhood traumas are at the basis of many chronic illnesses.

Fibromyalgia is a painful condition but traditional medicine admits to not really understanding what causes it. The conventional medicine explanation and treatments are inadequate.

Here’s the status of conventional understanding and treatment of fibromyalgia:

The causes of fibromyalgia are unknown, but there are probably a number of factors involved. Many people associate the development of fibromyalgia with a physically or emotionally stressful or traumatic event, such as an automobile accident. Some connect it to repetitive injuries. Others link it to an illness. For others, fibromyalgia seems to occur spontaneously.

Many researchers are examining other causes, including problems with how the central nervous system (the brain and spinal cord) processes pain.

Some scientists speculate that a person’s genes may regulate the way his or her body processes painful stimuli. According to this theory, people with fibromyalgia may have a gene or genes that cause them to react strongly to stimuli that most people would not perceive as painful. There have already been several genes identified that occur more commonly in fibromyalgia patients, and NIAMS-supported researchers are currently looking at other possibilities.

At Inner Greatness Centers (IGCs) we take a new and different approach to Fibromyalgia. We take advantage of the insights from the ACE study that indicates that the real underlying cause of Fibromyalgia is unresolved stress from childhood traumas.

At IGCs we use new technologies to reduce the stresses from these original unresolved childhood traumas that cause Fibromyalgia. Because our new technologies are highly effective at reducing such stresses, client with Fibromyalgia often experience dramatic relief from their Fibromyalgia symptoms very quickly because the condition is finally being treated, not as a medical condition but as a wellness issue and stress related problem.

The reports from clients with Fibromyalgia and other forms of chronic pain are that they are getting far more effective results and relief with the IGC technologies than anything else that they have ever tried or even heard of.

At all IGCs we have a simple method of testing to determine if the IGC treatments for resolving the stresses at the basis of Fibromyalgia are likely to be effective or not. The test is completely non-invasive and safe and takes only a few minutes to administer. The test is free. The correlation between our free testing and IGC clients reports is that the test indications are accurate in a very high % of cases.

A similar version of our special form of testing is being used at leading hospitals in the USA. Dr. Yoshiaki Omura, M.D., Sc.D., Professor, New York Medical College, and founder of the Bi-Digital O-Ring Test (BDORT) teaches his method that his web site says is a simple, safe, effective, noninvasive and inexpensive ways to improve health and longevity for people of all ages. Acccording to his website, some people have had amazing benefits from this method. There is extensive video footage with demonstrations and explanations about the research done on this testing method at Dr. Omura’s web site at bdort.org.

Recognizing that Fibromyalgia is an ACE based disorder, our approach at the IGCs is on two levels. As part of our free testing we determine to what extent the problem should be treated at an emotional trauma resolution level (Consciousness Level) and at the Energy Level of what we call the Where to Start Chart. This kind of test provides a good basis for determining the modalities and priorities for which technologies to use in treating to resolve the stresses at the basis of the condition. Here’s what the Where to Start Chart looks like – 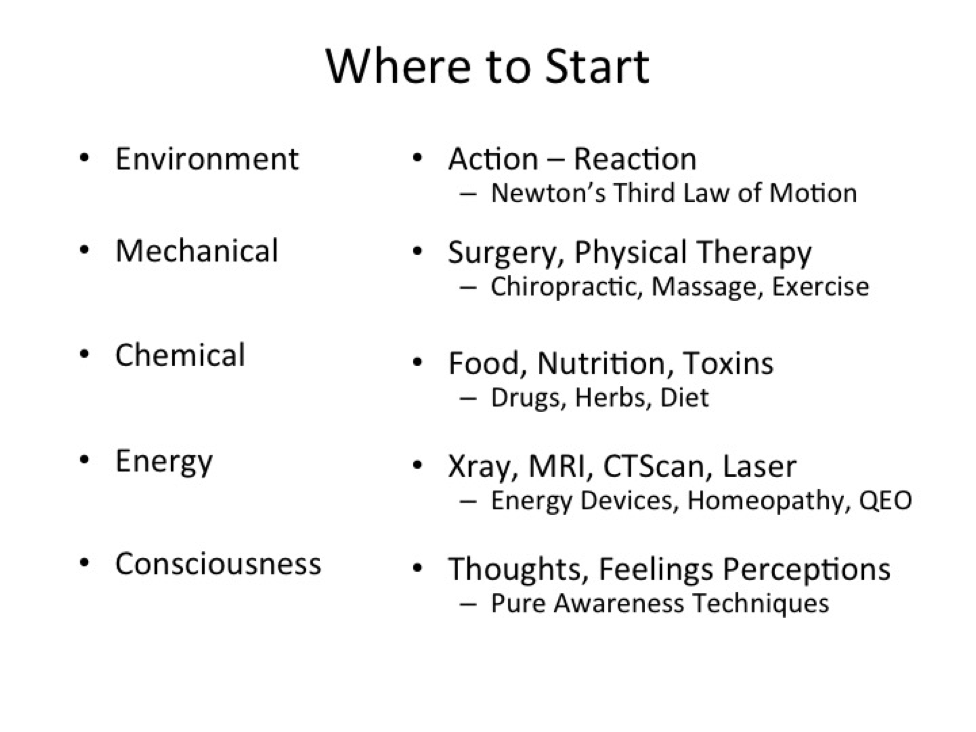 We start the testing by seeing which levels are involved. We use the testing of the muscle’s response to get this information from the body’s “wisdom.” Then we test to see what percentage of the problem is likely to be resolved at the consciousness level which means the experiential or emotional level. This is the level of the unresolved childhood traumas that are what the ACE study is about.

Then we test to see what percentage of the problem is likely to be resolved at the Energy level using the Quantum Energy Optimizer (QEO). Typically this combination produces substantial and often complete resolution of the stresses that have been causing the Fibromyalgia pain, resulting in the client being pain free, sometimes for the first time in many years.

When our testing shows that the solution to the fibromyalgia pain is most likely to be on the Energy level (Where to Start Chart above) then treating to remove the “physical stress” that is causing the pain has also been highly effective. See our page about reducing the stresses that cause Chronic Pain.

We now have a special version of our Inner Guidance App that helps guide you through the resolution of the unresolved emotional pain at the basis of your fibromyalgia. The app and the preparation for using it are all on this page – Vaporize Your Fibromyalgia