You are at Home » Products » Mobile Phone Radiation Protection 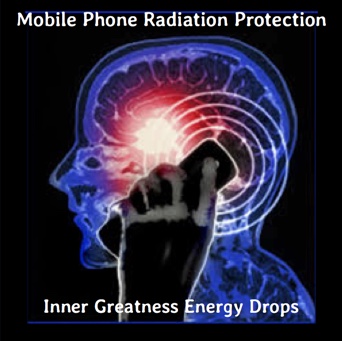 These Inner Greatness Energy Drops are designed to strengthen the energy field of your body to help protect you from the negative effects of mobile phone radiation and other kinds of electromagnetic field radiation.

This is one of the best ways to protect yourself from the dangers of our ever-increasing “e-smog” from the many sources of electro-magnetic field radiation that are present in our modern world.

More recent research reveals that the radiation has an indirect effect. The increased radiation from holding a mobile phone close to your head for extended periods of time has an effect of weakening something called the blood-brain barrier.

However, extended use of mobile phones weakens the blood-brain barrier. So the increase in brain tumors is not directly due to the mobile phone radiation. It is indirectly related to it by the weakening of the blood brain barrier.

Therefore, it is important to do something to reduce this weakening effect from the mobile phones. The Inner Greatness Mobile Phone Radiation Protection Drops ampoule increase the strength of the blood-brain barrier and at the same time, strengthens the over-all energy field of the body.

Gradually over some weeks the energy of the blood-brain barrier again gets stressed and weakened by the extended use of mobile phones but you can protect yourself again by taking the Energy Drops about once a month and keep the blood-brain barrier strong. Because the energy imprinted into the Inner Greatness Energy Drops last for about 1 year, and you only need 3 to 5 drops each time you take them, the bottle should easily last full year.